Underfloor ducts provide air circulation through produce with the help of underfloor air ducts, create uniform temperature and moisture throughout the produce and displace excessive levels of carbon dioxide and the other byproducts generated when vegetables breathe the fresh air.

Bulk storage (storing in bulk on the floor of a storage) is one of the most common types of storage in Russia.

The choice of this type of storage is determined by such advantages as:

Bulk storage is suitable for such types of vegetables as potatoes, onions, beets. It is also sometimes used, though less frequently, for cabbage and carrots.

The ventilation system consists of a load-bearing wall (air-ventilation chamber), the walls of the vegetable storage building and underfloor air ducts. The fresh air flows through the intake valves on the load-bearing wall into a mixing chamber where it mixes with the recirculated air from the storage, obtains the required temperature and humidity levels, and is delivered to the bulk of produce through the underfloor air ducts. The temperature and humidity of the incoming air can be regulated with the use of the recycle valves, humidifiers, heaters and coolers. Forced-air fans can be installed either directly in each underfloor duct or in the hollow floor of the air-preparation chamber. In arched hangars, fans are installed in a specific-capacity grouping at the abutting end of the hangar.

The prepared air is delivered into underfloor cement air ducts with the help of high-pressure fans through the main level pipe.

Depending on storage mode, when the air goes through a pile, it ventilates, cools or dries the produce. If needed, a particular duct can be closed off; for example, if some of the produce in storage has already been shipped, or if a high volume of air needs to be supplied to just-stored produce that has recently been damp. Forced by the high-pressure fans, waste air is removed though the open exhaust valves, or is mixed with the fresh incoming air through the recycle valves. The cycle repeats.

In order to prevent the formation of condensation in a vegetable storage, special fans are suspended at specific intervals (some of which are equipped with heating elements).

For automatic microclimate maintenance in a storage, a Croptimiz-R controller is used. The controller is equipped with produce-temperature sensors, outer and inner sensors for temperature and humidity, and a sensor for carbon-dioxide concentration (CO2). The dispatch system makes it possible to adjust and monitor the microclimate conditions in a storage building by using a computer or smartphone.

The ventilation system is fundamental and is used for drying, curing, decreasing and maintaining the temperature of produce.

The independent system for the removal of carbon dioxide (CO2) maintains the required concentration of carbon dioxide in the chamber to avoid produce rot as a result of high CO2 concentration. The air is collected and removed from the storage through the bottom part from the chamber. If the CO2 sensor indicates a dangerous (pre-set) gas concentration, the controller switches on the removal system automatically. This system makes it possible to avoid exceeding the pre-set CO2 concentration and using the main forced-blowing system, which can lead to microclimate deviations and extra power consumption.

A refrigeration system is used when storing at high outer temperatures (in April, May, June) or when the temperature of produce has to be decreased in a short period of time like during crop harvest or while putting carrots and cabbage into storage. 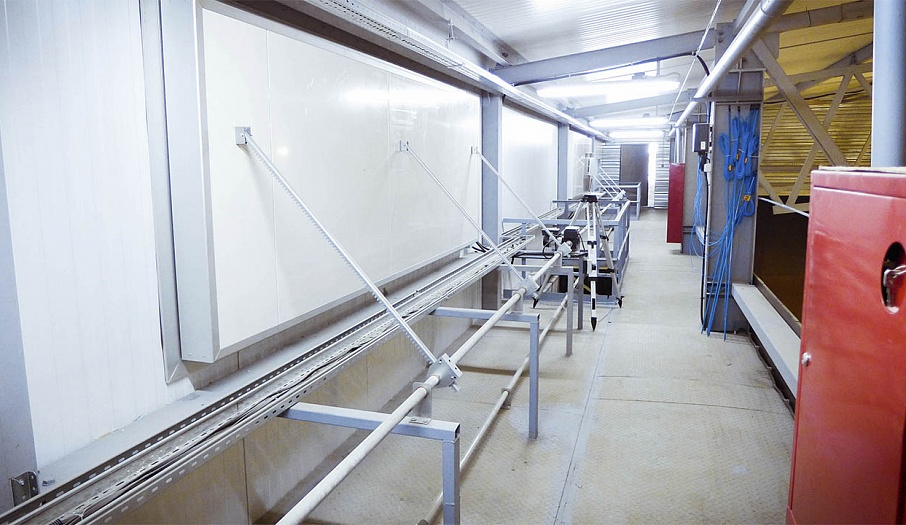 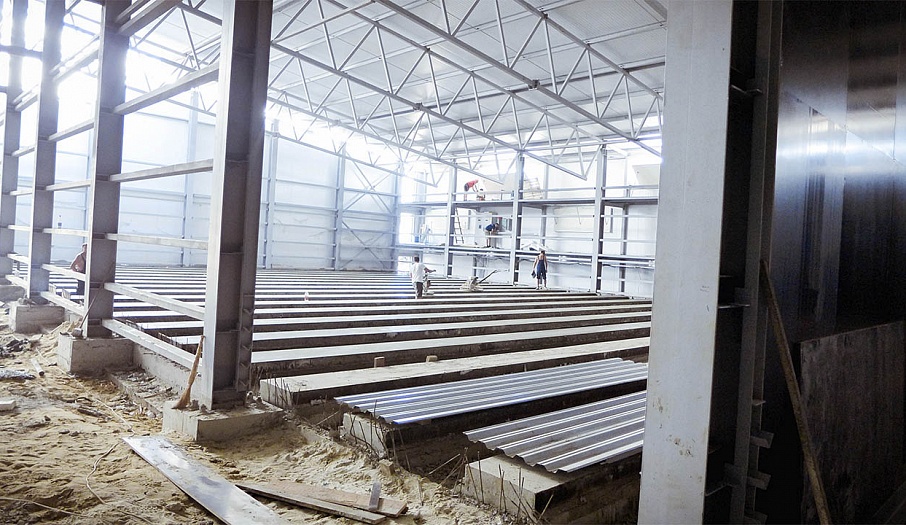 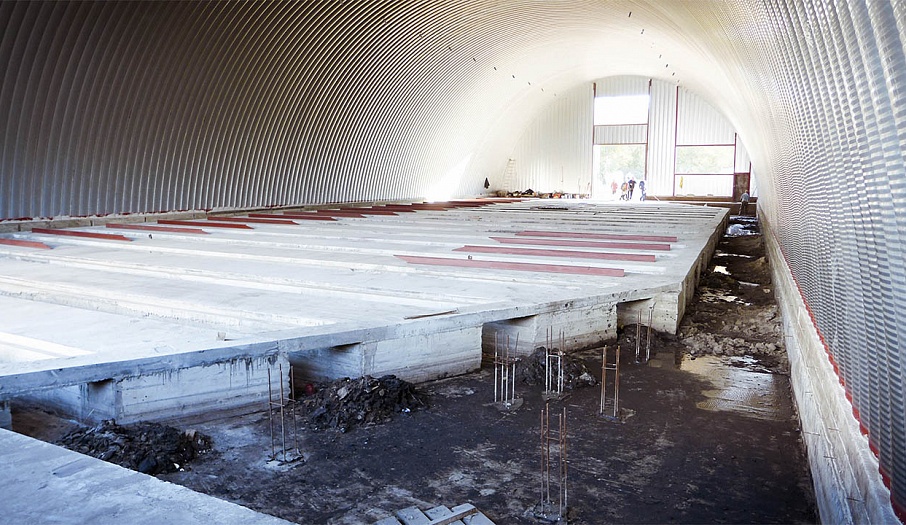 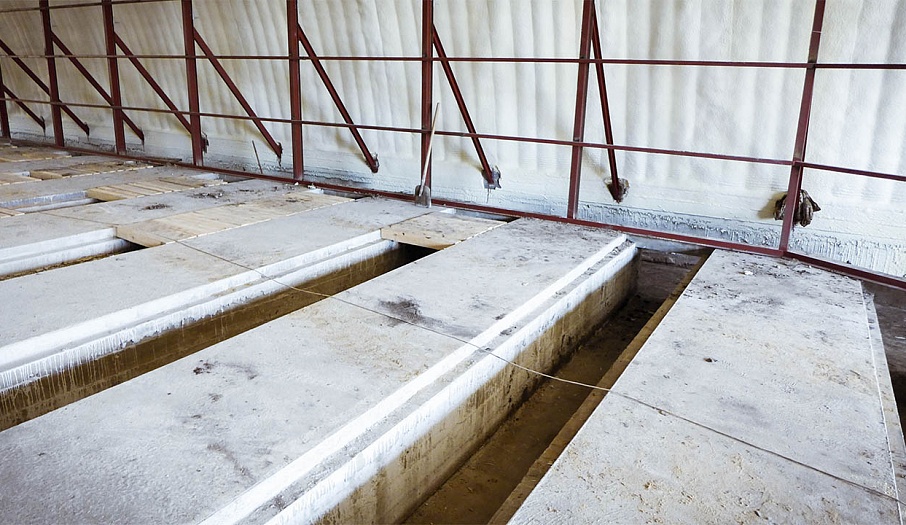 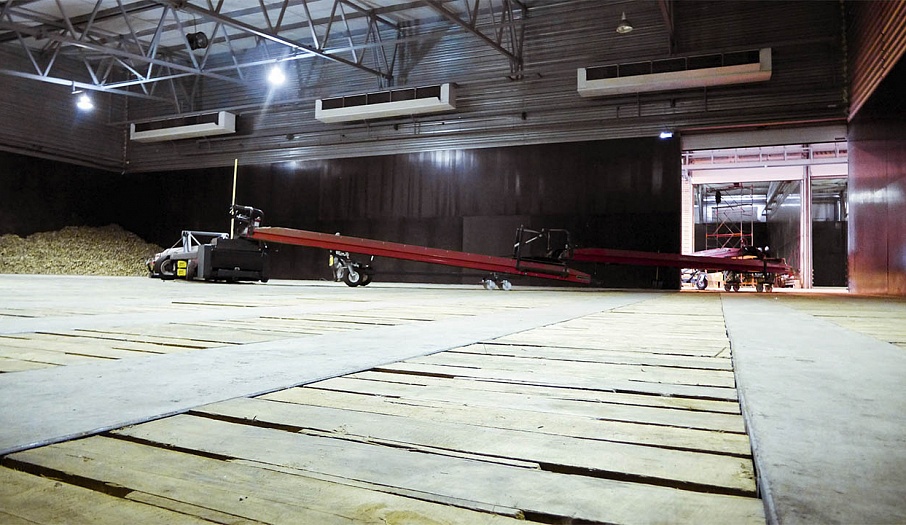 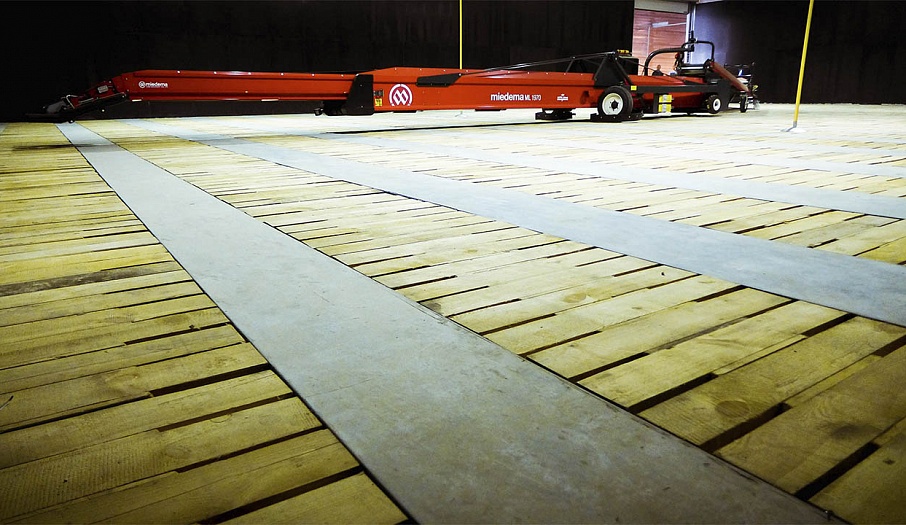 The specific arrangement of fans near the entrance to the air cooler provides the air drag into the heat exchanger of the air cooler (forced air coolers), which decreases condensate falling onto the surface of the produce and lowers the rate of produce drying.

These air coolers have broad laminar airflow with a low speed.

It is extremely important that the minimum temperature drop in these air coolers should be less than 6 degrees (Dt6k), that means that the boiling temperature of freon gas should be 6 degrees lower than the temperature in a chamber. If this requirement is not maintained, the advantages of these specialized coolers will be lost.

Ventilation and refrigeration equipment for a potato storage (intended for 8000 tons).

Ventilation equipment for a potato storage (intended for 4000 tons)