Wind machines (or tower fans) are one of the classic frost protection methods for gardens and trees, pioneered in California back in the 1920s. Windmills are now used in many parts of the world to protect crops such as grapes, deciduous trees, stone fruits and citrus trees. By the way, almost all of California's citrus orchards are protected by wind machines.

Wind machines usually consist of a steel tower with a large rotating two- or four-bladed fan with a diameter of 3 to 6 m and a height of about 10-11 m above ground level. This is to prevent the fan from hitting trees. The most efficient tower fans should have a rotational speed of 590 to 600 rpm.

The fans rotate around the tower at a speed of one revolution every five minutes. Most wind turbine fans blow at a slight downward angle towards the tower, which increases their efficiency. When the fan is running, it draws in air from the top and blows at a slight angle downward towards the tower and the ground. The fan is usually powered by a motor mounted at the base of the tower; however, some of the machines have motors that rotate with a fan at the top of the tower. 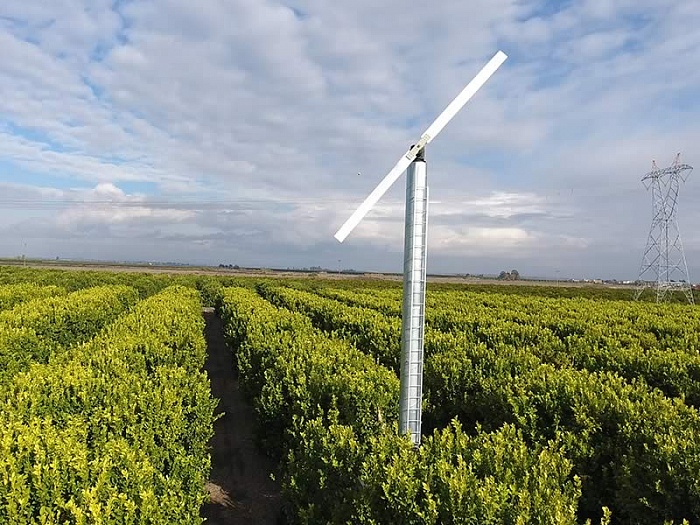 Before investing in wind machines, it is necessary to study the climatic features of the area where the gardens are growing and conduct a temperature survey to measure temperature inversions during the frost protection period. If there is little or no inversion, then no wind turbines are required. Place the cars in places where the wind is amplified by fans.

Wind electric machines generally require less labor and operating costs than other methods, but they are not very cost effective due to the high energy costs. In this regard, internal combustion wind machines are more cost-effective, but they require more labor costs.

The main plus of wind machines: they do not harm the environment (except for increased noise). Wind turbine noise is a big problem for growers growing crops near cities and towns. This should also be considered when choosing a frost protection method.

Wind machines provide protection by increasing the downward heat flux and by breaking down microscale boundary layers on plant surfaces. Fans do not generate heat, but redistribute that which is already in the air. Warm air at the top mixes with colder air at the surface, and the coldest air near the leaves is replaced with warmer ambient air. Better protection is achieved near the wind turbine tower. 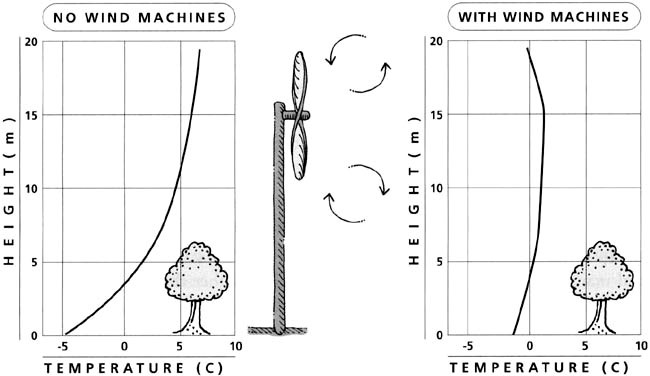 Typically, a 75 kW wind turbine is needed for every 4–5 hectares (ie within a radius of 120 to 125 m). If a single wind turbine is used, about 18.8 kW of motor shaft power per hectare is usually required. When using multiple machines, we recommend approximately 15 kW of motor shaft power per machine per hectare. The farther from the tower, the less protection, therefore, overlapping defense zones is needed. Typically, the protection zone is oval rather than circular due to wind drift.