The Fruit and Vegetable Union predicts a record harvest of apples this year - about one and a half million tons. This is due to climatic conditions: a rather mild spring and not a frosty winter. In addition, spring throughout the Russian Federation is in no hurry to leave - there is still no heat, and the later it gets warmer, the lower the risks of recurrent frosts.

The horticulture industry faces a number of challenges. Due to inflation, the prices for pesticides, seedlings, trellises, etc. have risen significantly. For example, in September the construction of refrigerating capacities for 1200 tons cost 50 million rubles, now - at least 70. The cost price has also increased: last year it was equal to 18 thousand rubles per ton, this year - 27 thousand rubles per ton, and this without accounting for packaging. Interestingly, the amount of subsidies has not increased.

The second problem is the huge shortage of workers. So, at the beginning of spring there were not enough cutters. This is not the easiest job, as it might seem at first glance, it requires certain skills. Earlier, Moldovans, Ukrainians, Uzbeks, trained in this skill, came to Russia. This year, due to the closure of borders, there was a personnel shortage and a shortage of workers. Free brigades had to pay two to three times the market value for their labor.

But not everything is so sad: new gardens are being laid in spite of the increase in production costs. This year, the laying area has exceeded 16,000 hectares. Every year it is planned to lay about 11 thousand hectares, but the plan is being overfulfilled.

If the harvest this year is good, then the wholesale price for them will decrease, as a conclusion: the industry will not be so attractive for investors. In 2020, the planned values ​​of the Doctrine of Food Security for apples have already been achieved, so if production increases, competition will also increase, and then the price. Therefore, it is assumed that the rate of planting of gardens should be reduced. In addition, the state simply does not have enough money planned in the budget for subsidies, so many may not wait for their subsidies. 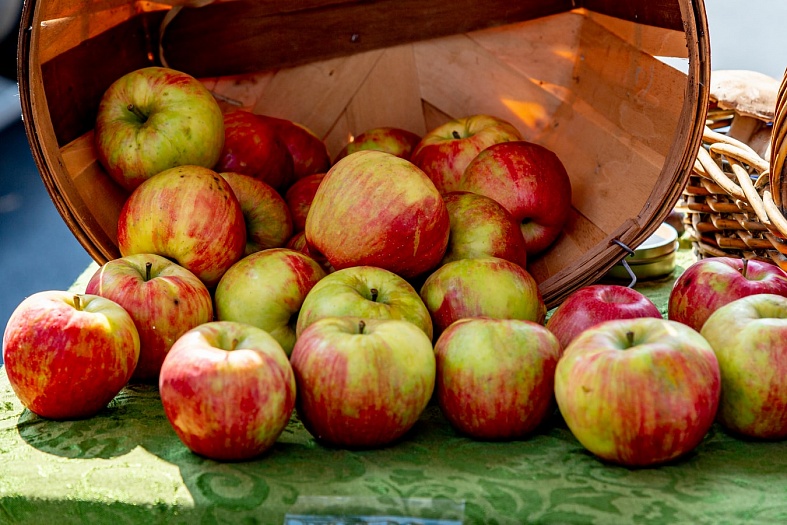 Why are there not enough apples in Russia?

Since 2016, the production of fruits and berries in the Russian Federation has almost doubled. Alas, this is not enough to satisfy the demand of citizens even by 50%.

The Ministry of Agriculture predicts that by 2025 the harvest will exceed 2 million tons. Now only a little more than 40% of the needs are grown of their own fruits and berries, and the Doctrine of Food Security provides for an indicator of 60%. A road map has been developed to improve this indicator.

The most rapidly growing apple orchards - 250 thousand tons annually. In 2016 there were only 500 thousand tons. domestic apples, of which about 40% were of high quality. And this year a record harvest is predicted, of which the rejection rate is 20. To cover at least 60% of Russians' demand for apples, it is necessary to grow a little more than 2 million tons. Provided that the existing state support is preserved, these volumes can be achieved in 4 years. But if consumption increases to the European level (100 kg), then 4 million tons of apples will be required.

With our apples, we can not only provide the country and the population, but also become one of the largest exporters, as happened with grain. The Russian apple is ecologically clean - which means it is competitive. In addition, in the Russian Federation, gardens are laid on new lands, where there is excellent black soil and water. There are no such natural conditions anywhere, and this is clearly a huge advantage.

The whole difficulty is that now most of the state support goes to large players. Financial support is very difficult for small businesses, although they can grow apples more efficiently and form the backbone of the horticultural industry in many developed countries.

In addition, the state registration of plant protection products is expensive, there are problems with the supply of high-quality planting material, the import of equipment. You also need to resolve the issue with personnel.

In order to "wean" Russians from buying imported fruits, it is necessary not only to increase the volume of production of domestic fruits, but to reduce the cost price and also improve the quality. Now about a million tons of fruits grown in Russia go into processing due to substandard conditions, and only about 750-800 thousand tons are sold fresh. With a volume of the Russian market of about 6.5 million tons, this is still less than 15%.

The most modern fruit storage facilities (for example, RGS) are able to keep apples fresh and attractive to the consumer for a long time.

Need a fruit storage? Call +74952293903, write info@agrovent.com. Or contact our specialist through instant messengers using the form in the lower right corner of the screen.