According to statistical data, potato storage losses in the Russian Federation have averaged about 8% over the past few years. In some farms this percentage is much higher. The most serious losses are usually caused by storage diseases.

Storage diseases are incurable, but there are ways to limit the spread of pathogens from diseased to healthy potatoes and to prevent the problem from getting worse. Proper storage management depends on proper identification of the disease causing the crop spoilage problem.

The first step in diagnosing a disease that occurs in the field or that develops during storage is to select partially rotted potato tubers (at least half of the tuber must be healthy). This is important because on tubers that are completely rotted, it often becomes nearly impossible to establish the original problem.

It is better to take a few dozen tubers from each affected area in storage. Next, you need to cut the tubers in half and remove the peel. Most of the pathogens that cause tuber rot during storage can enter the root crop through damaged areas - cuts, abrasions. Look for these possible sites of disease entry and examine the weak points of each tuber.

Unfortunately, many diseases are not easy to identify, and they often don't look exactly like the pictures in textbooks. Further study of the disease is needed (with the help of a disease diagnostic expert, for example). 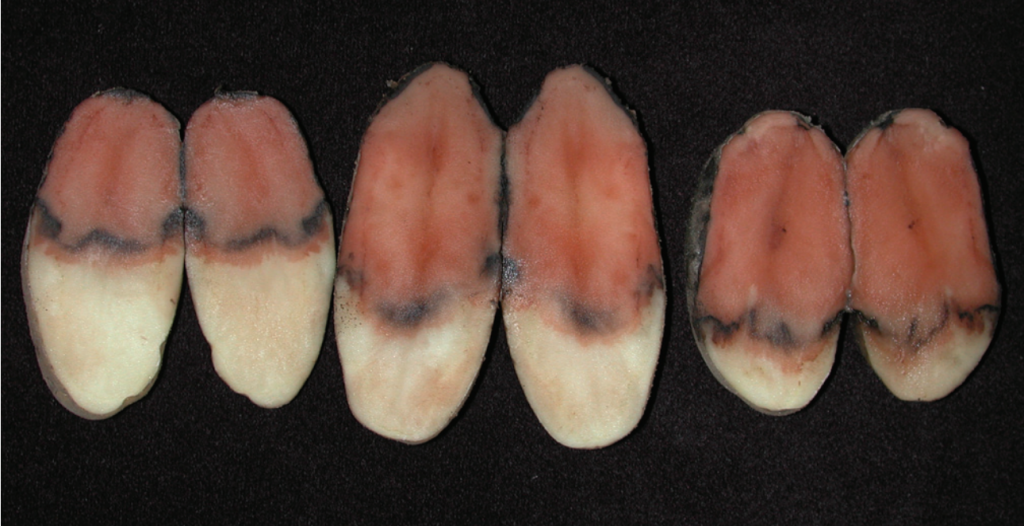 Pink rot is caused by the bacterium Phytophthora erythroseptica. Affected tubers often retain their normal shape, but the skin darkens and the inner flesh becomes "rubbery" when cut, similar in consistency to boiled potatoes. "Inside" turns pink after about 15-20 minutes of exposure to warm air and after about 30-40 minutes at cool temperature.

But it's not all that simple. The fact is that when the healthy potato pulp is exposed to oxygen, there is an oxidation reaction and it too turns a little pink. But don't despair, your nose can also help in diagnosing pink rot. If you pick up a distinct smell of ammonia, it's probably pink rot. 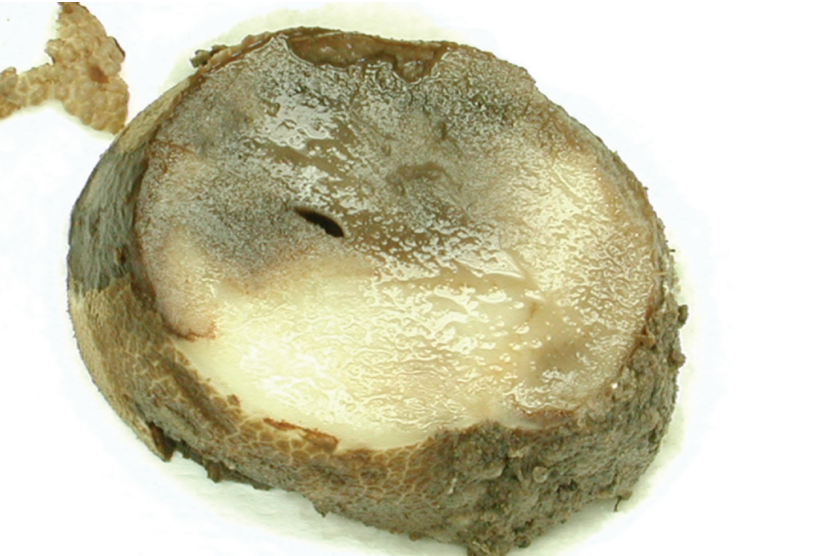 Excess moisture is fraught with physiological disorders and an increased likelihood of phytophthora, such as Pythium spp. leading to Pythium rot.

One method of identifying the presence of this "wet" rot is to gently squeeze the rotten tuber. If the lesion is present, a clear liquid will ooze out. This disease also tends to cause a gray-brown-black rot in the inside of the tuber, leaving the outer bark, or "shell" of the tuber, intact.

The bacterium usually penetrates through a micro-hole on the surface of the vegetable (a wound), so you should inspect the tuber for potential sites of entry. 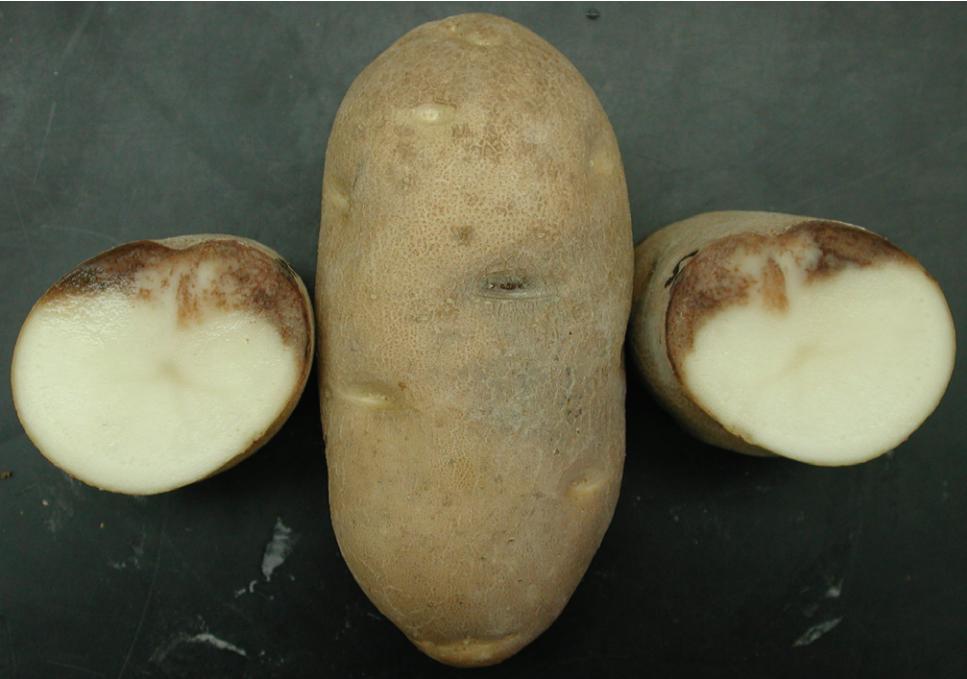 Tubers with Phytophthora infestans usually have a reddish or brown, dry, granular rot that spreads from the skin of the tuber inward. Tissues affected by the disease are hard to the touch, not wet or mushy. The degree of rot depends on how long the infestation has been present, the storage temperature, and the variety of potato. A good way to determine this disease is to remove the skin from the affected areas of the tuber and look for the characteristic reddish color, but expert confirmation is always recommended. 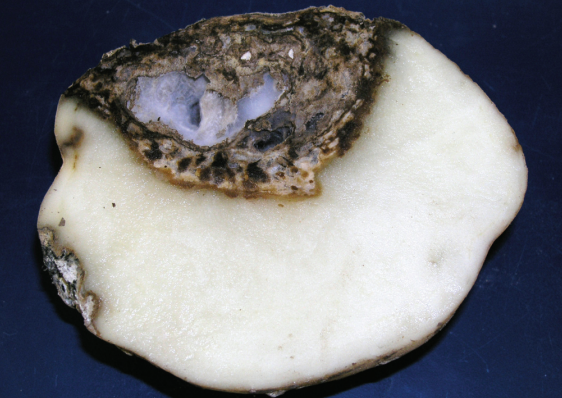 Dry rot caused by Fusarium sambucinum or F. coeruleum usually looks like crumbly brown tuber rot with crumbled tissue, often covered with a white fungal coating. Although infected tubers eventually shrivel and shrivel, the initial stages of the disease may look quite different. 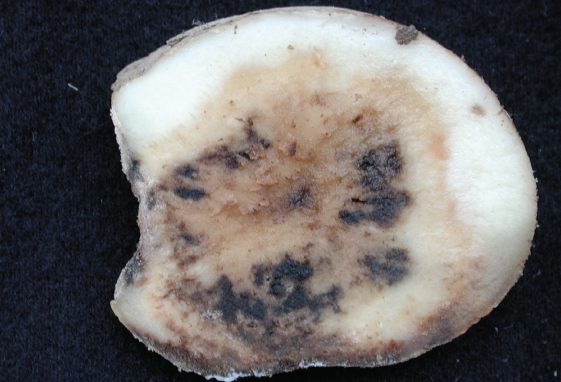 Soft rotted tubers tend to collapse easily, thereby spreading bacteria to neighboring tubers, resulting in "hot spots." High temperatures or a lack of oxygen in the storage room may also promote the spread of bacteria from tuber to tuber.

In most storage conditions there is a danger that wet rot bacteria will penetrate into tubers already infected with any of the previously described diseases. Intense breathing of infected vegetables can release heat that accelerates the rotting process. The combination of elevated temperatures and moisture can lead to extremely rapid disease development. A neglected wet rot problem can lead to the destruction of an entire crop in storage within days. 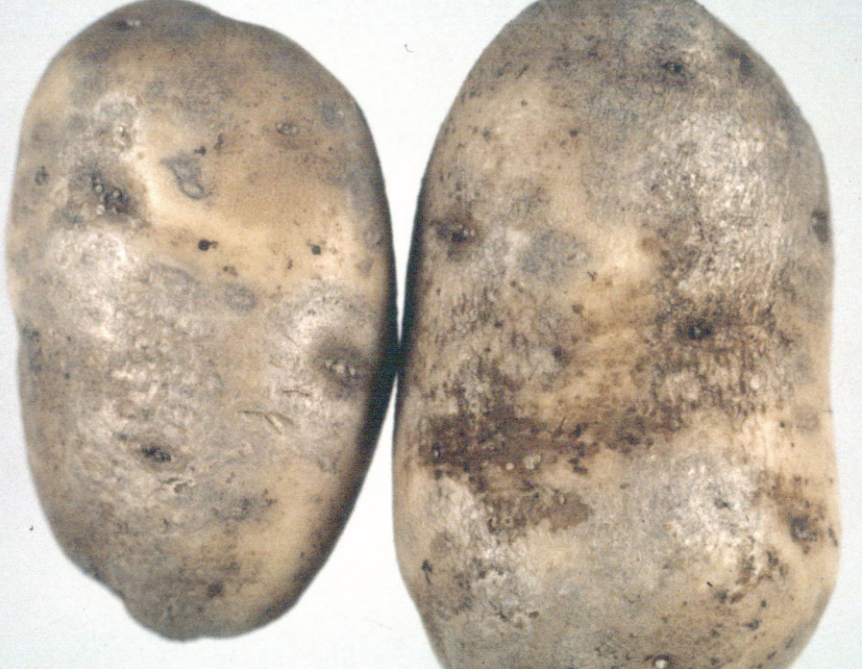 Although this disease does not cause rotting, silver scab, caused by the fungus Helminthosporium solani, causes gray or silver spots to appear on the tuber surface. 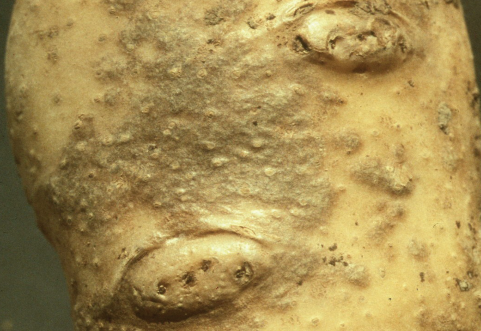 Black scab, caused by the fungus Colletotrichum coccodes, results in lesions that look like a silvery scab, especially in the early stages of disease development. As the infection progresses, the lesions usually become more prominent than those caused by silver scab. Small black dots can be seen inside the lesions with a magnifying glass. 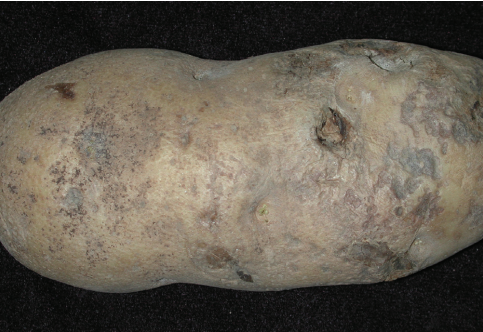 The disease is characterized by shallow, gray or black, dry lesions. Early lesions can be caused by the fungus Alternaria solani or the fungus Alternaria alternata. The edges of the lesions are usually moist and yellow in color. This disease occurs most often when tubers with immature rinds are harvested from sandy soils.

We will tell you how to prevent storage diseases in our next article! Stay tuned for updates!